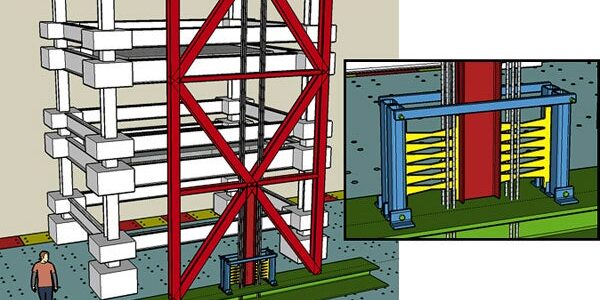 The National Earthquake Information Center reported 20,000 earthquakes across the world every year. Sixteen of these were disastrous ones that took the lives of many people and cost millions of dollars. Therefore, structural engineers in Chennai have come up with new designs to resist such catastrophic incidents from harming the building. The advancements in technology have enabled newer methods of construction that are immune to natural forces. But, how do structural engineers design earthquake-proof buildings? This blog post will explain the various steps through which a structural engineer constructs seismic-resistant buildings.

How does an earthquake influence structural integrity?

During an earthquake, the shockwaves travel in all directions in tiny, rapid bursts of energy. Generally, all buildings can handle vertical pressure. But, horizontal forces can be a problem. It sends shocks through the walls, columns, beams, and connectors. Therefore, there will be a significant difference between the sideways and the top movement. This shock puts the frame under massive pressure and the structure collapses after a certain level.

How earthquake-resistant buildings are designed?

Since the earthquake pushes the building from one end, the idea is to oppose the force from the other side. This effect will keep the structure stable.

Most structural engineering companies in Chennai will lift the building to isolate it from the ground forces. The building is constructed on top of a flexible foundation made of rubber, steel, and lead. In the event of an earthquake, the pads in the foundation absorb the seismic waves and keep the structure steady.

Every vehicle would have a shock absorber. Likewise, engineers use it to reduce the external pressure on the building. It is done by vibrational control devices and pendulum dampers.

A damper is placed on every floor between a beam and a column. Dampers are cylinders with silicone oil that is fitted with piston heads. During an earthquake, the energy is diverted to these dampers that push the heads against the oil. This force converts into heat and thus releasing the additional force.

This form of damping is used by structural design companies in Chennai in skyscrapers. A large ball is suspended from a building connected through a hydraulic system and steel cables. When an earthquake strikes, the ball sways in the opposite direction and creates balance for the structure.

Plastic and concrete rings underneath the building channel the energy and take the force away from the structure. Once the seismic waves hit the outer band, it is deflected and any remaining force is mitigated as they pass further layers of the ring. Therefore, the waves do not even touch the structure.

A structure must distribute the force to protect itself against earthquakes. Therefore, an engineer uses cross braces, diaphragms, shear walls, and moment-resisting frames to strengthen the building.

All these enhancements will improve the structural integrity of the building and ensure its safety during natural disasters. Get in touch with the top structural engineering companies in Chennai for your construction projects.